Exploring Mallorcan Wines with our Sommelier

His great knowledge, the wide reference letter and the clear and calibrated advice to the diner were the distinctions that made him obtain the award.

Would you like to learn a little bit more about Mallorcan Wines?

If you keep on reading you will find an Interview with our awarded and beloved Sommelier, we hope you enjoy it!

It seems astonishing but, in the two years since Charles Marlow’s Deia Olive Press has been in existence, we’ve never written about the Mallorquin wine scene. To correct this oversight, I spoke to Sebastien Longo, sommelier at the Restaurante Zaranda at the splendid luxury hotel Castell Son Claret. Zaranda is the only Michelin two-starred restaurant in the Balearic Islands.  Tucked away on the edge of charming Es Capdellà at the foot of the Serra de Tramuntana mountains, Castell Son Claret is the former finca of an estate dating back to at least 1450 and possiibly the most charming luxury hotel in Mallorca. Set in lush gardens, with just 38 suites and rooms, the hotel is a retreat from the hustle and bustle of modern life. This helps create a delightful atmosphere of intimacy and exclusivity.

Along with the Zaranda and Olivera restaurants, the hotel’s Castell Bar is the perfect place to relax with a signature cocktail after an idyllic day spent in the pool, gardens, spa or Moroccan-style hammam.

A short history of winemaking in Mallorca

Before we discussed the contemporary Mallorquin wine scene, Sebastien was kind enough to educate me in the history of winemaking on the island.

A market for wine existed in Mallorca as far back as the sixth or seventh centuries BC. But it wasn’t until 123 BC when a Roman army led by Quinto Cecilio Metelo conquered the island that vineyards were introduced into Mallorca. During the thousand years of Roman occupation that followed, Mallorquin wine grew in status until it was possible for Roman historian Gaius Pliny the Elder to announce that ‘Balearic wines are compared with the best in Italy’.

After the Moors conquered Mallorca in 903, a period of three hundred years during which the island was subject to Koranic law followed when alcohol couldn’t be consumed. Despite this, vineyards continued to be cultivated that took advantage of the sophisticated irrigation systems invented by the Moors that watered the olive terraces. There’s also evidence that wine was drunk in Mallorca while the Moors ruled the island.

When Mallorca became Christian again in 1229, one of the first things Jaime 1 did was to grant licenses for wine to be cultivated in Bunyola, Campos, Felanitx, Manacor, Porreres and Valledmossa. Between the 14th and 18thcenturies, winemaking became one of the economic mainstays of Mallorca. Mallorquin wines were traded all over the Mediterranean.

Up until recently, the golden years for winemaking on the island were 1865-1890 when the devastation of the French wine industry caused by phylloxera led to a rapid growth in the number of vineyards in Mallorca. So much wine was shipped to France from the ports of Palma, Portocolom and Alcúdia that some shipping companies did nothing but export wine.

Sadly, phylloxera arrived in Mallorca in 1891 and rampaged through the island’s vineyards. Production was drastically reduced until it didn’t even cover domestic consumption and wine had to be imported. Many vineyards were given over to almond growing.

Although Mallorca’s vineyards began to recover at the beginning of the 20th century, island winemaking continued to suffer setbacks. During the Spanish Civil War, land was given over to cultivating essential food crops. The tourist boom of the 1960s caused the children of many Mallorquin vintners to leave the wine business for tourist hospitality. Cheaper wines from the Spanish peninsula began to be consumed in bulk.

In the 1990s, Mallorca’s winemakers began to reverse the decline by improving the quality of wine grown on the island. They took greater care of the crops and embraced the latest technological innovations in winemaking. This led to a revival in Mallorquin wines made using native island grapes. Today, high quality Mallorquin wines have unique characteristics and a distinct personality.

Thanks for setting the scene for us, Sebastien. Can you tell me a little about yourself?

I was born in Argentina and lived in Bolivia, Brazil, the United States and Italy before arriving in Mallorca ten years ago. I’ve worked as the Castell Son Claret Beverages Manager for the past five years and I’m also the restaurant sommelier for Zaranda. I’m biased but I’d say Zaranda is the greatest restaurant in Mallorca. It’s heaven for lovers of gastronomy and I work with a fantastic team.

My bosses give me absolute freedom to do what I think is best for the hotel and the restaurant.

Also, I love Mallorca. It’s an amazing place. Everywhere you visit is beautiful. The climate is ideal. It’s very safe. People are educated, and I’ve never felt like a foreigner. If you have the best job in the world and live here, what more could you ask for?

Coming back to wine, how is the Mallorquin wine scene different from that in other parts of Spain?

I’d say the main difference between us and the peninsula is our geographical position and climate. Because we’re in the middle of the Mediterranean we have a much more changeable climate which affects winegrowing. Also, many winegrowers in Spain only make wines using autochthonous grapes and here they use a wider variety, which makes for more diversity in the wines. 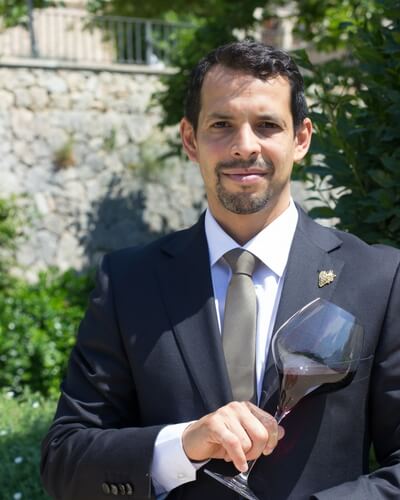 What would you say is trending in Mallorquin wine?

As I said before, more and more people are returning to native island grapes. I know of wineries that have spent almost 10 years recovering their original vines. Each day, wineries are searching for an identity for themselves and their wines. It will take time but since I’ve been on the island, I’ve seen a significant qualitative change.

Organic and biodynamic wines are becoming more popular. There is very good soil here and nearly all the wineries are small so it’s not that difficult to be ecological and have a sustainable viticulture. Biodynamic wine is produced as naturally as possible – avoiding pesticides, for instance. Almost all the wines on the menu at Castell Son Claret and Zaranda are at least organic.

What is the approach to wine at Castell Son Claret and Zaranda?

The quality of the wine in our establishments is fundamental to our philosophy. We understand that wine is essential part of living the good life and believe in offering the widest possible choice to suit all tastes.

Today we have around 500 different labels from around the world. Many of these are productions of less than 1000 bottles and unique, absolutely sought after pieces.

What are the most popular Mallorquin wines at Castell Son Claret and Zaranda and why?

We always try to offer something different for our guests, which is why I’m constantly looking for different styles, grapes, blends and prices.

Do you have a favourite Mallorquin wine and what are you currently enjoying?

I have my favourites but you’ll have to come and visit me to find out!

Seriously, I’m always trying something new and try not to repeat a wine. But drinking wine is not mathematics. I choose what I want to drink when the time is right, depending on the company and the weather.

How will your wine drinking change as we move into the winter?

It’s logical that red becomes more prominent, but I always insist that there are many winter whites with plenty of volume and structure that can be enjoyed at almost the same temperature as a red.

Thanks for that tip, Sebastien, and for sharing your impressive knowledge with us.

Now that we’ve got the ball rolling with our Mallorquin wine coverage, we’ll be returning to the subject every month. If you’re a oenophile or just curious, be sure to watch this space.

Blog and Interniew  by www.charlesmarlow.com specialists in luxury properties in towns of Valldemossa, Deia, Soller & Fornalutx such as villas, town houses, fincas & apartments.