Hardly a tourist visits the island without taking a walk on one of Mallorca’s beautiful beaches, the deep blue sea at its feet and pure sea air in the lungs.

The offer is wide and varied: on the 550 kilometers of coastline there are 340 beaches, from small stone bay to long sandy beach, lonely Calas, which must be hiked or touristy perfectly developed swimming paradises.
We introduce you the best beaches in Mallorca and reveal why our Mediterranean water has that deep blue color – unique in the Mediterranean. 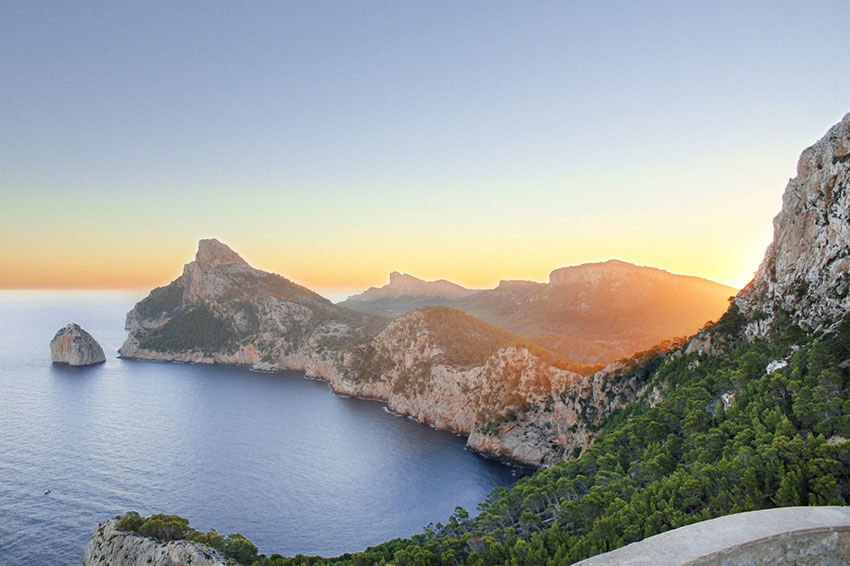 All three words are encountered in Mallorca in search of the perfect beach. It makes sense to know how Playa, Cala and Bahia differ.

“Cala” literally means “bay”, designates a small sea access with sand or stone beach. Especially the east coast of Mallorca is covered with Calas, small bays, which are often surrounded by shady pine forests. On the west coast of Mallorca you will find many rocky calas, some only accessible by dizzying hiking trails. But here you can also find – at least in the off season – the so often sought after “lonely bay”. It should be noted that many of the small bays which are only accessible by food are not monitored (lifeguards) and have no infrastructure, neither restaurants nor provide umbrellas.

As “Bahia”, also literally translated “bay”, the Spanish refer to large bays like those of Palma, Alcudia and Pollensa, not beaches.

“Playa” or catalan “Platja” are long sandy beaches. You can find them especially in the north of Mallorca. In the south, the well-known sandy beach “Es Trenc” is the epitome of Caribbean dreamland. Es Trenc is under protection, the dunes run over in pine forest, there are hardly any buildings and some cool bars invite you to sundowners. 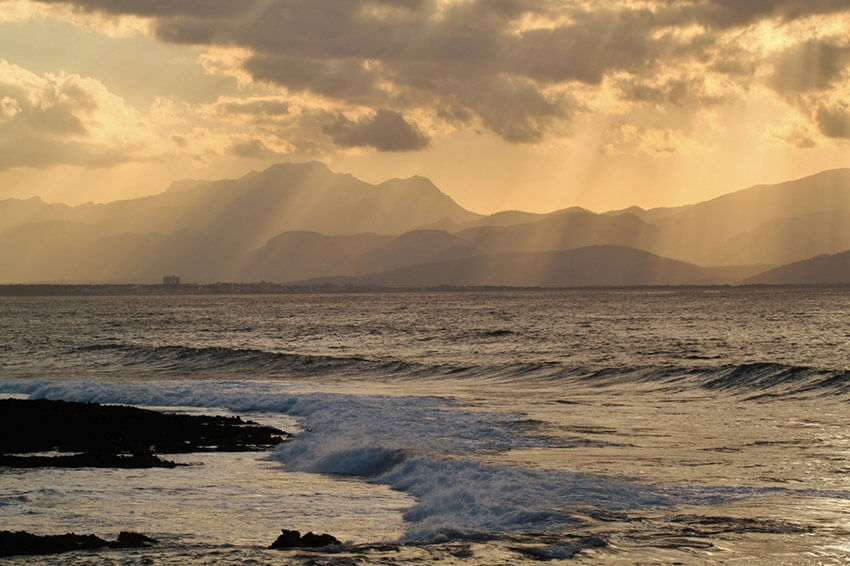 Why is the Mediterranean sea around Mallorca so blue?

What is the use of the most beautiful beach if the water is not turquoise?
Mediterranean is not Mediterranean. And just in Mallorca, the many shades of blue are striking. The water around the island is particularly clear and transparent, the bright sand is in contrast to dark areas of sea grass and rocks. The crystal-clear water we owe to the Poseidon gras, also called green treasure on the seabed, abundant in the sea off the Balearic Islands. The protected Neptune grasslands and algae filter the water, making them extremely important for the marine ecosystem of the sea.

“Posidonia oceanica”, as the Latin name is, is perceived by tourists especially as annoying and stinking when the dead brown plant parts are flushed to the beach. Even yacht owners are often ruthless and anchor in the seagrass meadows. In order to prevent this, anchoring berths and buoys have been anchored to the seabed on many beaches and bays in Majorca, where boats can moor. Because we need the seagrass with its photosynthesis to clean the water and fish use the seagrass meadows as a retreat. In addition, seagrass plays an important role in the protection of the beaches: it slows down waves that wash away the sand. And the discarded leaves, which are washed ashore, counteract erosion, for example, during storms and feed crustaceans and shellfish.

While algae are found all over the world, the Mediterranean, and especially the Balearic Islands are the Eldorado of the Posidonia oceanica, as well as being 40 meters deep, when the water is clear enough for photosynthesis.

Curious: Seagrass grows very slowly and can grow old. At Formentera, seagrass was discovered that is 100,000 years old.

It is not easy to choose a beach as the most beautiful. Here are the opinions of tourists and locals apart. While Mallorcans prefer to go to the beach with a cooler, folding chair and big family and hardly need any infrastructure, the tourist appreciates the bar for the sundowner, deck chair rental and water fun. But what counts for everyone is crystal clear water and sand.

The top ten beaches in Mallorca according Trivago

In a recent survey by the travel portal Trivago.es various beaches in Mallorca were voted among the ten most popular in Spain. In the top ten are the Platja de Muro in the north of Mallorca, followed by the beach of Cala Millor on the east coast, Colonia de Sant Jordi in the south and the Playa of Port d’Alcúdia, also in the north.

The best beach in Mallorca according Ryanair guests

Ryanair has named Caló des Moro beach in the southeast of Mallorca as one of the ten European beaches that can compete with Copcabana in Brazil in their recent blog “Into the Blue”. The statement: You do not have to cross the equator to find dream beaches.
The small beach in Mallorca is only 40 meters wide and convinces with fine sand, crystal clear water and excellent opportunities for diving and snorkeling. The exhausting road to Playa is well worth the effort. 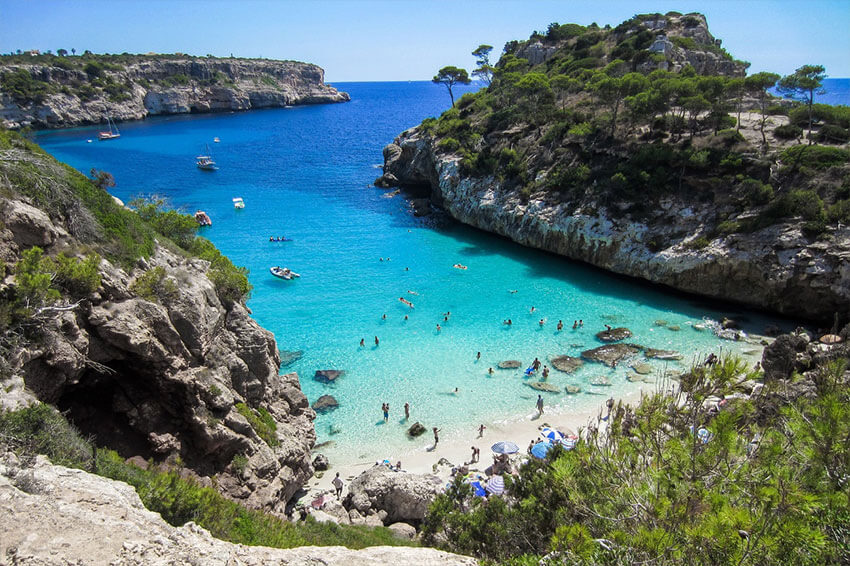 Our recommendations for the best beaches in Mallorca

The northeast can offer particularly natural bays and beaches. From the Cala Agulla in Cala Ratjada, a long sandy beach with infrastructure and pine forest, leads a shady and worthwhile trail to Cala Mesquida, which can also be reached by car. The Cala Mesquida is sparsely populated, high sand dunes reach to 1 kilometer into the country and the color of the water is in no way inferior to the Caribbean.

The west coast is impressive, rough and wild. Only a few small bays can be found on the cliffs. But they are the more romantic. Especially the Cala Deia is often used as a movie set. Easily accessible from Deia via a hiking trail or by car (parking is available), the bay offers some summer cottages, a rocky beach and a wild-romantic restaurant reminiscent of Robinson Crusoe. The restaurant is only open in summer.
Also on the west coast are the bays of Estellencs and Port de Canonge worth a visit. Here, small fishing boats anchor in the deep blue water, a stone beach leads into the sea and simple but typical beach bars invite you to eat and have a drink.

In the north are not only the best beaches in Mallorca set, but also small bays which are worth a swim stop. The Cala San Vincente is one of them and even the journey is extremely spectacular, because the view extends far beyond the north coast to the sea. Cala San Vicente is a traditional fishing village that made concessions to tourism, but still retains its old charm.

And we have another insider tip for those who are looking for a “lonely bay”. It may not have been lonely, but at least never crowded due to the location: the bay on the island of Dragonera, quite easy to reach from the Castell Son Claret. Drive to Sant Elm, a romantic fishing village that has kept its charm. From Sant Elm there are connections several times a day (except in winter) with a small boat to the offshore island, which is under protection. On Dragonera there is practically nothing except 3 lighthouses, hiking trails, lizards, the small harbor and much peace. Take a picnic with you!

Castell Son Claret wishes you a relaxed day by the beach!